On a recent scoarcher of a Saturday, I was perusing the infinite rows of sunglasses at a Sunglasses Hut on the Upper West Side in an attempt to soak up a few minutes of free air conditioning on that particularly hot and muggy day. I tried to look interested in the merchandise as to not let the salesperson onto my plan for a break from the sun. He came over, oozing with the excitement of a sale, and noticed my Ray-Ban aviators. “I notice you wear Ray-Bans. You know, everyone needs a classic pair of aviators and a classic pair of wayfarers,” he said. I laughed and told him about how my face looks ridiculus in a wayfarer. Everyone tells me so, and I agree. I tried on a purple pair which made me look like a crazy old Italian woman in the ’50s, but he tried to sell them to me anyway!

The whole conversation got me really wanting a pair of wayfarers so I bought a bright pink pair on the street for $5 to test them out. My boyfriend immediately shot me down, saying diplomatically that that they were not very “me”. I think they look cool, but ultimately I will be sticking with the aviators which I should probably glue to my face at this point, considering they spend more time living on the bridge of my nose than off. 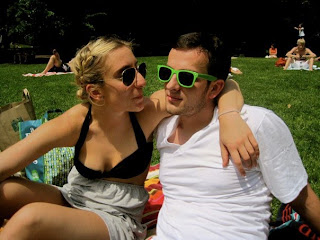 To me, aviators are a classic. They have been and always will be in style. Think Tom Cruise in Top Gun (1986) all the way to Bradley Cooper in The Hangover (2009). After extensive research (Googling), I learned that aviators were designed in the ’30s for fighter pilots two years before being released to the public. Everyone, apparently, wanted to look like a fighter pilot and the look has stuck. They’re not going anywhere!

The Wayfarer, on the other hand, is a trendier classic, going in and out of style every few years. These were also popularized by Tom Cruise in Risky Business (1983). Perhaps he should become the new face of Ray-Ban. Over the last two years, it seems like everyone I know has bought at least one pair of wayfarers and I’m always a little jealous. But there’s nothing like walking out the door every morning into the sunlight, armed with a pair of classic Ray-Ban aviators, black lens, gold-framed glasses.

Side note: My sister’s theory is that aviators are for blondes and wayfarers are for brunettes!

Next debate topic: blonde vs brown

Welcome to Lemon Stripes, where my adventures in motherhood, style, healthy(ish) living, and life in New England come to play.